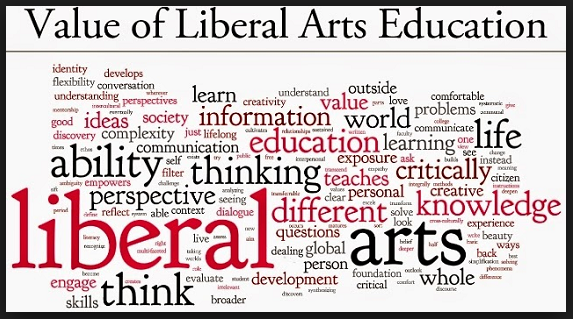 What is a liberal arts education?

As an Indian student growing up in a typical Indian household, the children of the 80s and 90s grew up listening to a single refrain: ‘become a doctor’ or ‘become an engineer’. The more ambitious ones went for the bureaucratic services. With the change in millennia, the refrain remained the same, with one fresh entry: IT. Suddenly everyone wanted to be a software guy and head for the fabled goldmines in Palo Alto and the Bay Area.  Indians became the world’s IT intellectual repository, powering Microsoft, Google, Apple and now Facebook. In this race to meet some new technological landmark youngsters (and even parents) often forget the original purpose of education. The purpose of a college degree is not to find ‘a’ well-paid job. At least that is not, or should not, be the sole purpose of a college degree. Rather it is the widening of mental horizons, the procurement of knowledge and information, development of potential and personal talents, and the ability to prepare oneself for a career and fit into a wide variety of roles and positions. And this is where a liberal arts education makes its entry. A liberal arts education (which ironically has nothing to do with liberty or the arts alone) is the high priest of academia, opening minds and possibilities to a wide variety of subjects from the social sciences (economics, history, law, politics, sociology, psychology, etc) to the natural sciences (chemistry, physics, geology, computer science, biology, anthropology, etc.) and everything in between.

How is a liberal arts college different from a national university?

This would probably be your follow up question. While there is no right answer to the question: which of the two is better – a liberal arts college or a large national university – it is easy to outline the differences in the two systems.

Why would it be good for me?

If you are among that increasingly rare species who believe that college is for learning, not to ready yourself for a job in four years’ time, a liberal arts college is probably where you would fit best. Such an education as some academicians will point out readies you ‘for life’ as opposed to ‘a job’. Given the wide scope of learning it incorporates, liberal arts students come out of college well prepared for various jobs. A solid body of learning across disciplines and subjects is their strongest suit, consequently making them eligible for roles within a wide variety of fields. For instance, a student who took up English Literature and communications in college would during college intern at various organizations – a newspaper/magazine, a media production house or TV channel, a website, a music company, etc. She could finish college and then work at one or several of these places during her career and rise through the ranks to head a division in a managerial position. She did not necessarily have to have been a business management student to get there. In short, a liberal arts education is just another, often more fun, way of reaching the same goals, perhaps with a higher purpose and with a well-rounded personality. It can be the difference between an educated and knowledgeable person; the thin line separating the high skilled from the skilled and versatile; the professional from a global citizen.

So, if you are a person who is passionate about learning and interested in a wide-ranging field of subjects, keen to develop your knowledge and skills, haven’t yet decided your choice of profession and are looking to explore your options and suitability, a liberal arts education could well be the key that unlocks the mystery of what your future holds.

Which colleges could I apply to?

The list in Canada may not contain names with universal recall like in the US, but these are nevertheless great institutes of learning. Some of them are Humber, Trent, University of Ottawa, and York.

The UK also has a shorter but nonetheless impressive list of liberal arts colleges. These include King’s College, Richmond, University of Bristol, University of Edinburg and Winchester.